How Indians Can Protect Themselves against Their Biggest Killers

After spending the morning in the gym, 34-year-old Mehul Desai, a resident of Ahmedabad, was ready for a regular day in office. Unfortunately, given recent lay-offs and increased work pressure, stress had become part and parcel of his daily schedule. He was about to go in for a meeting with his boss when he felt a severe pain in his chest. He was rushed to a nearby hospital by his colleagues, where it was revealed that he had suffered a heart attack. However, it was too late by then, and Mr. Desai couldn’t be saved. Like him, many people around the world lose their lives to heart diseases and other critical illnesses.

As per a WHO report published in 2014, heart disease was the biggest killer of people around the globe and in India too, where it killed more than 12 lakh people.  It was followed by Lung Disease and Stroke which killed 1,061,863 and 881,702 people, respectively.

Cancer too is quickly emerging as a major cause of death among Indians with 548,015 cancer deaths reported in 2014. Among the different types of cancers, Oral Cancer is the biggest threat, followed by Breast Cancer. Diabetes, Liver diseases, and Kidney diseases also took more than 6 lakh lives in the country in 2014. Department of Health Statistics & Information system and WHO

Apart from these diseases, road accidents are also a leading reason for deaths in India. India has the “dubious distinction” of leading the nations having maximum road accidents, clearly indicating how unsafe Indian roads are. 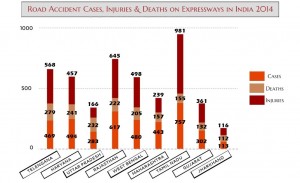 Road Accident report by the Ministry of Road Transport & Highways

Thanks to modern health care facilities, most of these life threatening health conditions are curable, at least if detected at early stages. However, a major problem with availing treatments for these diseases is affordability. Over the last decade, the cost of medical treatment has grown at a rate of 10 percent.

Medical bills for treatments of cancer, heart diseases, and other critical illnesses run into multiple lakhs with just a single vial of drugs or a medical procedure costing up to a few lakhs. For e.g. 50 tablets of the drug Sprycel, which is prescribed for Blood cancer, costs around Rs 1,65,000.  Similarly, a valve replacement surgery costs somewhere around Rs 3.5 Lakhs, Angioplasty costs between Rs 1 to 3.5 Lakhs, and a By Pass surgery costs around Rs 2 Lakhs. 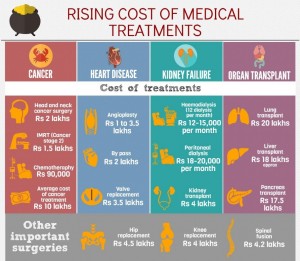 The Underinsured Indian- A Major Cause of Concern

While we Indians go to great lengths to ensure the safety and security of our families, we underestimate the role insurance plays towards the achievement of that goal. As per a report in 2013, only 25% Indians have a life insurance cover. On the contrary, our western counterparts, like the Americans, understand the importance of insurance very well and hence almost 90% of the total American population has insurance. As Indians, we are also not serious about health insurance, which is one of the primary reasons why affording treatment of these critical diseases becomes even more difficult for us. According to a report by the Insurance Regulatory Development Authority of India, only 17% of Indians have a health insurance cover. Even in urban areas, as many as 82% of patients don’t have any insurance cover for their health.

Secure Yourself with a Term Insurance Plan

We often hear about families that go through immense financial stress after paying for the costly treatment of Cancer, Heart Diseases, Kidney Ailments, etc. Things become even worse when the breadwinner of the family succumbs to one of these diseases. It is therefore essential to buy a term insurance plan which not just takes care of your family’s finances after you are no more, but also pays for the high cost of treatment of these diseases. In addition, it should also protect your family in the event of an unforeseen tragedy like a road accident.

One such insurance plan that completely fits the bill is the ICICI Pru iProtect Smart. It is unlike other regular term plans available in the market. It not only protects your family in the event of your unexpected death, but also offers multiple benefits that aren’t available with any other plan.

To combat the increasing prevalence of lifestyle diseases, one must make positive changes in their daily routines. Exercising regularly, eating healthy, minimalizing alcohol/tobacco consumption are some of the steps that will put you on the right path. In addition to this, you must also provide a safety net for your family by buying a term insurance plan such as ICICI Pru iProtect Smart, which will not just protect your family in the event of your unforeseen death, but will also ease your financial burden and stress in case you are diagnosed with any of these ‘biggest killers’.

This article was published on Firstpost

Firstpost is India’s first and only global online newsroom. A 24-hour news site, dedicated to breaking down current affairs with analysis, opinions and views.

Why term insurance needs to be a part of your financial plan?

Sign up to get the latest articles in your inbox

ICICI Prudential Life Insurance is one of the leading life insurance companies in India. We provide insurance plans & policies that include a range of products like term insurance, ULIPs, tax saving plans, pension & retirement plans.